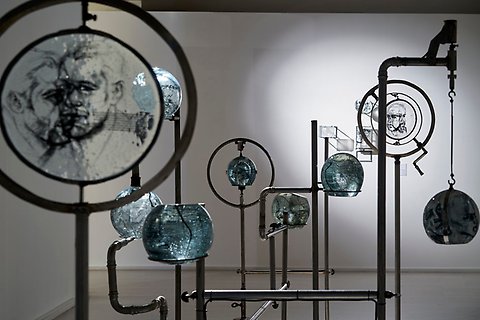 Since 2014 Claudia Virginia Vitari‘s work has been concerned with migration, refugees and asylum seekers. The installation combines two themes from her latest work: Identitá Interstiziali, O-Platz originated from the observation of the life and protests of a group of asylum seeking people (mostly from African countries) who coordinated demonstrations at Oranienplatz in Berlin over the span of months; and Identità Interstiziali, LAGERMOBI, Osservazioni for which the artist visited different Berlin refugee centers. This part of the project focuses particularly on the life and hardships of asylum seekers hosted in Berlin refugee-camps. The work comprises a comparison between the two distinct but related experiences, protesting and waiting.

The installation is composed of 8 spheres (metaphorically "flasks") of screen-printed glass realised using the "roll-up" technique, two "loupes" and metal joints. It alludes, both to a structure for scientific experiments and to the neuronal path of metaphorical social and relational synapses. The biographies of the asylum seekers, printed on the spheres with meticulous graphic-sculptural work, react to each other through the metal connections, a symbol of constrictive social relations dictated by the bureaucracy of the host country. In this way, the work alludes to the disciplining conditioning imposed by forced migration and arrival in the country of destination, which forges the identities of individuals, as if they were subjected to a kind of "social experiment".

The installation thus gives form to a representation of the space and relationships that emerge in the existential interstitial situation typical of the condition of a migrant person, who lives in a dimension suspended between the place of origin and an undefined space of arrival, merging past experiences (country of origin and culture), present experiences (the stalemate in Europe) and future experiences (expectations and dreams).